A walk through different classics of music for violin and orchestra, this time covered with ethnic instruments by the prestigious violinist Vasko Vassilev and directed by Miguel A. Navarro. A concert with sound, different, participatory and with several surprises, which aims to bring classical music closer to a younger audience and will delight all those attending.

We will be able to dance with the strength of Russian music with the Saber Dance, Lezginka or the Dance with Crotalas by A. Kachaturian and also feel the beauty and softness of the Aisha’s Dance by the same composer.

We will listen to Vasko Vassilev in some of the most difficult fragments for the violin like the 3rd mov. from P. Chaikosky’s violin concerto or the 1st mov. of the J. Sibelius concerto in reduced versions and adapted for a younger audience. We will feel the duende of a flamenco version of the Dance Macabre by C. Saint Saens or Entre Dos Aguas by Paco de Lucía.

We will make an incursion into the baroque where we will have the opportunity to enjoy the joy of The Entrance of the Queen of Shaba by GF Haendel in a version for orchestra, trumpet and violin and the calm of the 2nd movement of the Concerto for oboe by B. Marcello, performed by the fabulous trumpeter Vicente Campos together with Vassilev.

And finally, we will end the concert dancing together withColdplay songs arranged for symphony orchestra. All this with sound as in the best movie theaters so that the acoustic language determines the listening of this different concert dedicated to the youngest audience. 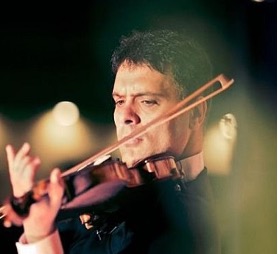 Born in Sofia in 1970. He studied at the Moscow Conservatory and also in London. He has won the main prizes in the international competitions N. Paganini (Genoa), Carl Flesch (London) and Jacques Thibaud (Paris).

At the age of 21, Vasko Vassilev begins to make concert tours in Europe and Asia, participating in international festivals such as Schleswig-Holstein Festival, Bang and Olufsen Music Festival, Kenwood Festival, etc. He frequently collaborates with the Hallé and Bournemouth orchestras and is one of the most sought-after violinists as guest concertmaster for orchestras such as the London Philharmonic, London Symphony, Opera de Lyon, etc.

Since 1991 Vasko Vassilev has been principal concertmaster of the Royal Opera House Orchestra in Covent Garden in London, a fact that made him the youngest concertmaster in the history of that orchestra. In 1998 Vasko Vassilev appeared as a soloist in the European tour of the Royal Opera House Orchestra, playing Tchaikovsky’s violin concerto, obtaining extraordinary reviews. On this tour, it is worth mentioning his excellent concert at the National Auditorium in Madrid. As a soloist and chamber musician, he has recorded albums for the Trittico Classics, Harmonia Mundi andErato labels.

His discography includes, among other works, The Brahms Violin and Piano Sonatas and the record premiere of the John Adams Violin Concerto. Vasko Vassilev is the founder and concertmaster of the Laureate String Orchestra, made up entirely of musicians who have won prizes in the most prestigious international competitions and with which he has achieved a platinum record for the recording Original Four Seasons with Vanesa Mae. He has been Conductor of the Bulgarian National Radio Orchestra and Creative Producer of the Royal Opera House. Vasko Vassilev plays on an Amati violin from 1705. 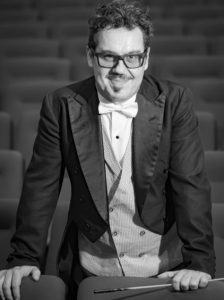 Principal musician of the Ciutat de Barcelona and National Orchestras of Catalonia and the Principality of Asturias Symphony Orchestra, he has been invited as first trumpet to the Florence Camerata orchestras, Moscow Virtuosos, Hilbroun Orchestra (Germany), Jeunesses Musicals World Orchestra , Chamber Orchestra of the European Community, and also in orchestras such as those of Cadaqués or the RTVE Orchestra.

He has participated in the recording of more than 30 albums with artists such as Luciano Pavarotti, Alfredo Kraus, Plácido Domingo, Ainoa Arteta, Witold Lutovslawsky, Frübeck de Burgos, Charles Duttoit, Marta Argerich, Sumi Jo or Jessy Norman, as well as in various film musical productions. and theater with directors such as Jose Luis Garci, Emilio Sagi or Llorens Barber.

The Nosoloclasica orchestra is an orchestra born within the “Salvador seguí” Superior Conservatory of Music in Castellón under the direction of Miguel A. Navarro. Formed by CSMC students in the subject of Nosoloclassical Recording Orchestra, it is dedicated, collaborating with prestigious artists, to the development and recording of projects of different styles unrelated to classical music such as jazz, pop, heavy, cinema, opera, rock, folk, etc, with the aim of complementing and expanding the training in styles of CSMC students, as well as facilitating these students’ access to working life.

Born in 2016, it has participated in different projects and major festivals such as Legends of Rock, Jazz Symphonic Sketches, Cinema Concertos or Warcry Symphonic together with large groups and regularly collaborating with artists such as Warcry, Duccio Bertini, George Lazaridis. Keito Saito, David Pastor, Pamela Tan Nicholson or Vasko Vassilev.